We’ve just released the Jajah Buttons which enables you to receive calls from your website, blog, online community, email, etc’ directly to your phone and all that without revealing your phone number. Check it out, call me now.

The Jajah button let’s you determine when, where and to whom you are available for calls. It also give you a permanent short link that leads people straight to your phone. You can always reach me with this url – jajah.com/guy

The Flash widget is completely customizable in size, colors, supports multiple languages and have a unique look and feel. The widget was developed in Actionscript 2.0 mainly for compatibility reasons, it was intended to be released some time ago, before the Flash 9 Player reached 90%. Over that time it was overdeveloped with many features and a complete set of controls that were developed from scratch. Many of these features did not make it to the final (first) release, but, are ready to be put back in when the time is right, so stay tuned if you’re interested in this kind of stuff.

The Jajah Button graphics were designed by the uber talented crew at Ichiban.

Developing Actionscript 2.0 controls is a tiring and unappreciated task. Show it to a non-flash developer and they’ll tell you – “thats nice but I have that in HTML also, I simply write an input tag…”, they simply can’t see the difference. This strengthen my feeling that some people, mainly developers, are color blind and can’t differentiate between a circle and a box ;). If Microsoft is expecting these guys to do something appropriate with Silverlight, then they shouldn’t, cause it ain’t gonna happen.

Using the macromedia’s V2 components, as always, didn’t seem right. The Flash CS3 Actionscript 3.0 component set, although modest, looks like something that is more reasonable to inherit from. To complete your set, take a look at yahoo’s Flash components.

This is the code I used to embed the Jajah flash widget inside this post using the Kimily Flash Embed wordpress plugin. There are more parameters you can add to make its colors look more like your style, check the editor for that. The Jajah Buttons Editor also gives you the code snippet suitable for your needs.
[code] [kml_flashembed movie=”http://www.jajah.com/buttons/jjb.swf?v=1″ width=”220″ height=”200″ fvars=”sn=guy” /] [/code]

Screenshots from the editor: 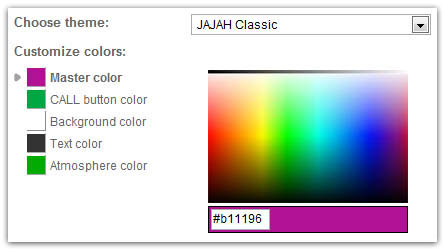 Countries you wanna get calls from

You always hear about these stuff, a website has been hacked and its landing page has been changed by…

Akismet has saved my blog from over 100,000 spam comments

Since I’ve installed Akismet last year it saved my blog from 100,425 spam comments. It seems to…