Microsoft recently released the SilverLight version of their Download Center. Its a nice demonstration of the SilverLight technology. But, looking under the hood reveals the huge amount of Javascript used to run this website. I can’t see the benefit this has over DHTML if all the logic is anyway implemented by Javascript. The only thing that was maybe more natural doing using SL is the small rotating arrows on the right floating menu. Obviously that won’t make it as a good argument for selecting the right technology for a project. 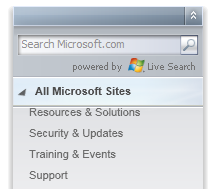 It reminds me of when SilverLight was getting solidified into the final 1.0 version still named WPF/E. The only thing that came to my mind was WTF/E is this cr*p?! After all we were promised, all this buildup, this is what we’re getting?! A stupid rendering layer with no logic?! Neitherless to say that it was very disappointing.

MS hurry to release SL bigger brother "SilverLight 1.1 Alpha" that is now going to be named SilverLight 2.0. This version will have a subset of the .NET CLR, logic written in C# and all king of goodies. Hopefully MS can keep up to some of it’s promises with this release.

Apparently Adobe has fixed the bug I’ve found that enables a swf file to crash the browser, with…

I have finally closed all of my TABs

This happens to me once in a few months, I managed to clear all of my FireFox tabs. Read…