There is a claim that there isn’t enough serious Flex applications out there. I’ve recently had the honor to preview an impressive one, and also to conduct a short interview with Dima Gutzeit the Project Manager of this app, named Mailvision Hostlynx 2.0.
This is another one for you to showoff when arguing for the right technology for your next application, currently there are only some information and screenshots, but, I’ll let you know when a full demo is publicly available. 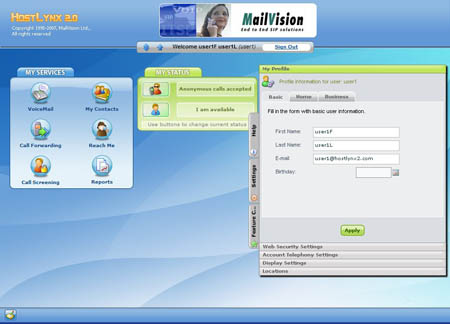 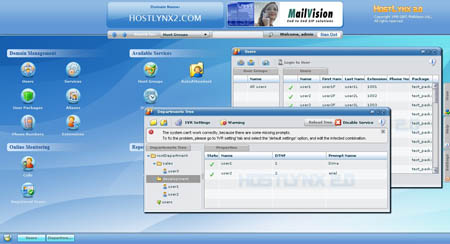 A: Hostlynx 2 is the next generation of MailVision Class 5 SoftSwitch for VOIP telephony (SIP protocol). The product allows a system provider to setup a telephony network and offer advanced telephony services to its subscribers (IPCentrex). System management of the solution is based on Flex+Webservices.

Q: Who is the audience of this application?

A: Service providers and corporates who wishes to enter the fast evolving VOIP market.

Q: Why do you think Flash is the right technology for this project?

A: During the research for the project we have considered several technologies, including various AJAX toolkits, JSF and etc. The following convinced us to go with Flash/Flex: Flash player is installed on 98% of desktop computers so in majority of cases it will not require any client side installations. We wanted to deliver the best user experience we could and flash allowed us to do that.

A: Our application uses webservices to communicate between client and server, where Flex application is used as a webservices client and JAXWS on the server side. When we started working with Flex (2.0) its webservices implementation was very weak and basic, so we had to create many workarounds on the server side to compensate. Flex 2.0.1 Hotfix 2 changed that, since we were part of the beta program for Hotfix2 and Adobe staff were kind enough to listen to our requests and enhance the webservices implementation.

*Q: Have you used Cairngorm? *

A: Yes, we do. Our application uses MVC, and this is done by using Cairngorm (2.0). ServiceLocator is responsible for all the webservices related stuff – sending requests and etc.

Q: How many people worked on the project?

A: Project development involved 2-3 developers and one designer. Project duration was around one year.

Q: Did any of the developers had previous experience with Flash or Flex?

A: That was one the “negative” factors when we decided on technology, since none of our developers had any previous experience not with Flash nor ActionScript. The learning curve was not a short one, since all the developers were from Java/JSP world.

Q: Will there be an online demo of the app?

A: We are on Beta 2 release, and a full featured demo will be available as soon as the application is stable enough.

Q: Do you have plans for creating similar apps?

A: I believe that the majority of future web/desktop projects of Mailvision will use Flex/AIR.

Q: What do you think is the future of the Flash platform and RIA in general?

At JAJAH we are always looking for ways to leverage our payment system in new and exciting ways. One…

My blog is Iphone compatible

See a bunch of crowded geeks these days?! There is a good chance that Apple’s Iphone is involved.…